Our inner west Social Mixed Basketball competition finished up last night (Monday 29 August) and what a great comp is has been.

First up was a hotly contested 3rd place battle between Babadooks and Urban Rec Mafia, with the game going down to the wire. here is no such thing as a dead rubber in this game.

The Babdooks edged out the Mafia with a 1 point win. Sam from Urban rec got fouled with 5 seconds to go lobbing up a 3 Point shot. Sunk the first free throw, but couldn't hit the next two free throws to win it. Such is mixed basketball, she can be a cruel mistress.

Then onto the main event, the two form teams of the league. The Rustys vs Nets & Chill.

The Rusty's have everything a Mixed Basketball team could need, a big who can the boards, post up game, shooting, ball handling and women who can hoop!

On the other side of the court you have Nets & Chill, known as the team that can make it rain anytime and any spot on the court. You leave them open, they can hurt you and if you come up on them, they drive right past you. A real triple threat and this is what Social Mixed competition is all about.

As you know by the headline, Rusty's took the Monday Mixed Competition out, in a very close match where the 3 pointing shooting of Nets and Chill kept them in the game.

Our next Mixed Social Competition @ Stanmore is in a couple weeks. So keep practicing. For more news and details of upcoming competitions read below or click here for up to date information.

Our Social Basketball Competitions do fill up, so don't miss out and lock in your spots today. 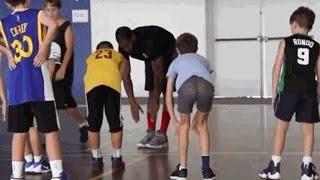 SPRING INTO OUR HOLIDAY CAMPS

WANT TO WIN A FREE SPOT AT OUR HOLIDAY CAMP?